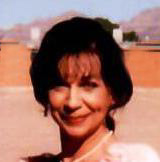 Mariea was a homemaker. While she lived in Tucson, Arizona, she was active in the Sheriff’s Auxiliary. She was an avid reader and was self-taught in many areas. She was known for her sharp wit and occasional stubbornness.

She is preceded in death by her parents and husband.

Cremation is in keeping with Mariea’s wishes, and her cremated remains will be taken to Ohio at a later date for burial.

There are no services planned. Cook Funeral Chapel in Grayville is in charge of arrangements.

Burial: At a later date in Ohio