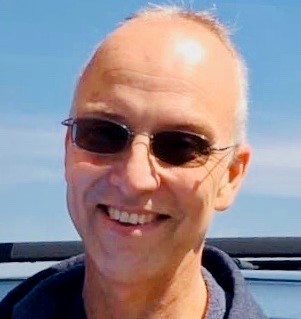 He previously worked in the warehouse for Champion Laboratories in Albion, Illinois, and most recently, he worked as a warehouseman at the Wal Mart Distribution Center in Olney, Illinois. Jerry enjoyed working with kids and was previously involved with the Cub Scouts and Royal Ambassadors Youth Group, pitching machine, and for nine years, he was the assistant basketball coach for the Edwards County Lions grades 6, 7 and 8. He also enjoyed bicycling and running.

Jerry was a loving man who had great enthusiasm for life, family, and friends. Whatever he undertook he did it with gusto. He was an amazing artist with astounding talent. His greatest gift was his love for family and friends. If you were his friend you were a friend for life. His wife, Tammy, was his soulmate. His love for animals (his babies) was grand. He loved and cared for his animals as they also loved and cared for him. His quick-witted humor was hilarious and his laughter contagious. To have been a part of his life family or friend is truly a blessing.

Survivors include his wife, Tammy Davis of Grayville; Marie Patterson of Olney, whom he regarded as his second mother; sisters Bonnie Huddleston and Denise (Dimas) Cabello, all of Tucson, Arizona; his pets Rico, an umbrella cockatoo, and Gertie “Sweet P”, his loving great dane dog.

He is preceded in death by his parents; and brother John Davis.

Memorials may be made to the Grayville Senior Citizens and will be accepted at Cook Funeral Chapel in Grayville.