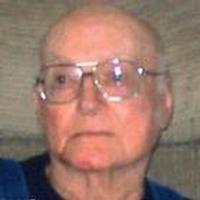 George B. “Tex” Craft, 98, of Grayville, Illinois, died Thursday, August 30, 2012, at Meadowood Nursing Home in Grayville. He was born October 3, 1913, in Mt. Calm, Texas, the son of Bethel and Ada (Patterson) Craft. He was married to Blanche (Bennett) Craft, and she survives.

Tex was a retired electrical lineman, and during his retirement, he enjoyed fishing, meeting with friends at the local coffee spots, and getting around Grayville on his John Deere lawnmower.

He is preceded in death by his parents, brother William Henry Craft, and sister Ethel Irene Muzel.

Graveside services will be at 2 pm, Sunday, September 2, 2012, at Oak Grove Cemetery in Grayville. There will be no prior visitation and those wishing to attend should arrive at the cemetery prior to 2 pm. Cook Funeral Chapel in Grayville is in charge of all arrangements.